The leg M77/4 focused on hydrographic and chemical investigations of the oxygen minimum zone of the tropical southeastern Pacific. The goal of the hydrographic measurements was to derive the present day distribution of the water mass and oxygen distribution in the oxygen minimum zone (OMZ) of the southeastern Pacific and resolve the oxygen differences in comparison with older data sets in the supply paths to the OMZ. On the leg M77/4 a meridional section at 85°50'W as well as 3 zonal sections at 3°35'S, 6°S and 14°S were measured (Figure 1). Ten profiling floats with oxygen sensors were deployed in the supply paths of the OMZ and will continuously measure the oxygen profiles along the flow paths. Time series of vertical oxygen distribution from historical data have shown tendencies of an intensification of the South Pacific OMZ and the floats and the hydrographic data will provide the data required to continue the oxygen time series.

A further main subject of the work was the investigation of geochemical components in the water column. For the investigation of circulation, water mass mixing and the influence of biological productivity, samples for the analysis of neodymium, silicon and nitrogen isotopes, as well as a number of natural radionuclides were sampled. Their distribution in the water column can be seen as ‘stock-taking' under today's circulation and ventilation conditions and can be used in paleo-oceanographic investigations.

In total 91 CTD profiles were sampled, 13 GO-FLOW profiles taken, 2400 sm of shipboard ADCP data were recorded, 10 profiling floats deployed and a Glider was recovered which was deployed on the previous cruise leg M77/3. 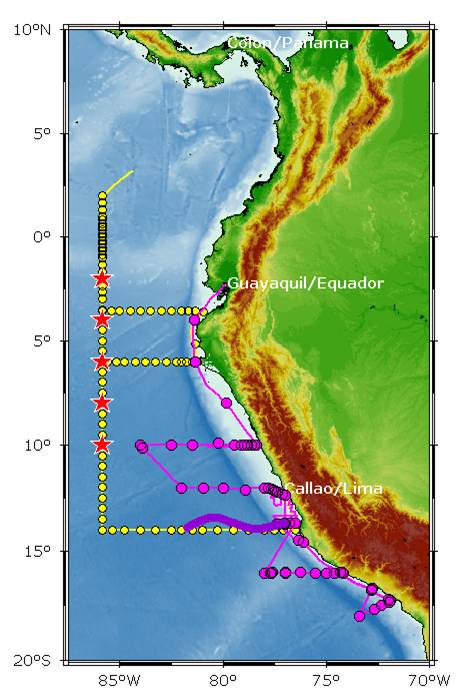